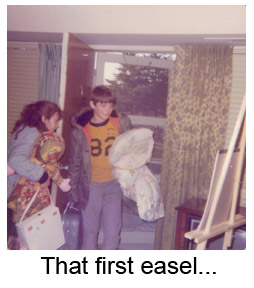 Vince Coyner does not color inside the lines. He sees the world with an intellectual brilliance and childlike exuberance that is seemingly incongruous. As a child he had such pent up energy that his teachers let him run around the school to abate his restlessness. In today’s society he would undoubtedly be labeled as ADHD and prescribed medication.  Instead he turned to art.

Coyner’s first exposure to art were masterworks like Michelangelo's Moses and the Sistine Chapel in Rome, Raphael's St. George and the Dragon, and Renoir’s A Girl with a Watering Can. Almost half a century later he cannot recall his exact thoughts, only that he knew he was seeing extraordinary things that created a lasting impression.

After getting his first easel as a young man, Coyner spent a number of years trying to become someone he wasn’t – trying to color inside the lines. He had become a connoisseur of art, drawing inspiration from Vermeer, Van Gogh, and perhaps most of all Bouguereau. But to emulate these artists on canvas was akin to putting on a shirt that was two sizes too small; it was simply uncomfortable and restricting. Then he saw a Mark Rothko exhibition at the National Gallery of Art in Washington. He stood in front of a monumental work that was largely white, and a light bulb turned on.

Liberated from the conventions of what he had thought was “real” art, his own creativity flourished. Though still indebted to those masters of representational art, he began to draw inspiration from artists like Mondrian, Lichtenstein and LeWitt, along with the wide spectrum of graffiti artists who create magic with a spray can.

After decades of artistic tribulation, discovering the freedom of unbridled abstraction, and honing his skills, Coyner has developed a style that is uniquely his own. Collectors may see in his work the colors of Francis, drips of Pollock, or dots of Damien. It is none of these, it is all of these. And it is unmistakably Coyner.

To stand in front of a work by Vince Coyner is to glimpse the frenetic genius of his mind. The artist’s joie de vivre envelops the viewer and draws him in to a world of discovery. It is at once energizing and mesmerizing. To own a painting by Coyner is to have a precious resource for rediscovering your own vitality and engaging your deeper consciousness, again and again.